Polyaniline (PANI) and PANI/f-SWCNT thin films have been synthesized by a chemical oxidative polymerization method. Ammonium persulfate (NH4)2S2O8 and hydrochloric acid (HCL) were used as an oxidizing agent and protonic acid dopant respectively. The results of XRD pattern showed that the neat PANI and PANI/f-SWCNT thin films have an amorphous structure with a broad diffraction peak around 2θ = 25o and 2θ = 23o respectively. FESEM images showed that both neat PANI and PANI/f-SWCNT thin films have nanorod structures and the diameter of PANI nanorod is about 95.8 nm. Also it is revealed that the aniline monomer was polymerized on the surfaces of f-SWCNT that leads to increase the nanorod diameters which become in the range of 100-195 nm. The conductivity measurements revealed that the value of percolation threshold (PT) was about 0.39 W% and the conductivity value of neat PANI is increased after incorporating f-SWCNT in PANI matrix. The value of direct allowed transition energy gap of neat PANI was 2.56 eV and it is decreased significantly after adding f-SWCNT to it. FTIR spectrum shows several absorption peaks centred at around 1556, 692, 1235, 830, 1450 and 1280 cm−1 which consider the characteristic band peaks of polyaniline. 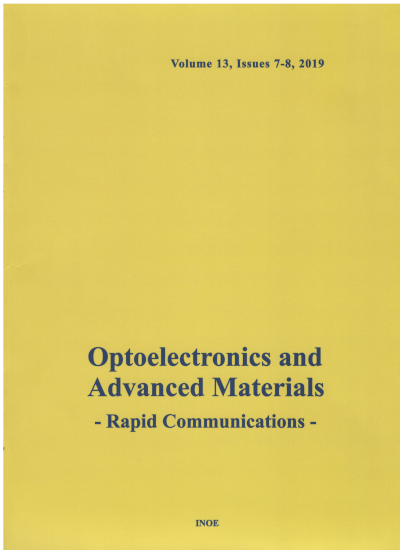